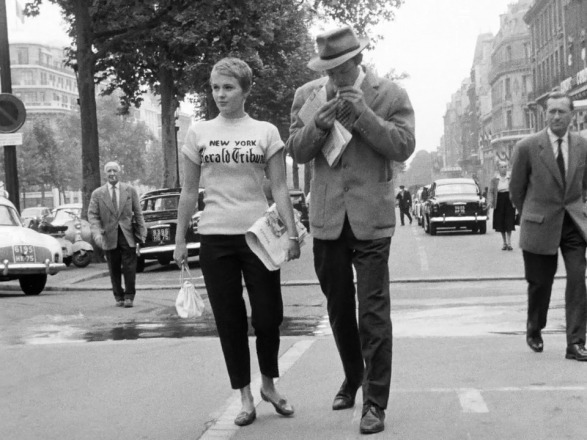 Tribal and provocative, the slogan t-shirt proclaims allegiance to a brand, cause, band or person. Since the first slogan t-shirt emerged in the 1960s they have become a cult staple reflecting the tone of pop culture, sub-culture, politics and art of the time.

One of the first slogan t-shirts was worn by Jean Seberg in Jean-Luc Godard’s film Breathless in 1960. Playing the role of Patricia Franchini, an American expatriate working for the European edition of the New York Herald Tribune in Paris, Jean exudes Parisian nonchalance in cropped black trousers, loafers, striped tops and a slogan t-shirt.

In the 70s and 80s slogan t-shirts were picked up by designers Vivienne Westwood and Katharine Hamnett who used the simple garment as a means of challenging the establishment. Hamnett wore one of her own t-shirts reading, ‘58% Don’t Want Pershing’, to meet the then Prime Minister Margaret Thatcher at a Downing Street reception for London fashion week designers in 1984. The slogan referred to public opposition to the basing of US Pershing missiles in the UK at the end of the cold war.

These slogan t-shirts of the late 90s have become iconised as rich, layered and culturally relevant symbols. Being both emotive and evocative the enduring appeal of the slogan t-shirt is unsurprising. 6397 have a long history of incorporating slogans into each season’s collection. Unassuming basics sport the chosen slogan. This season t-shirts and sweatshirts are emblazoned with the words ‘Painted Word’ and ‘Politics’.