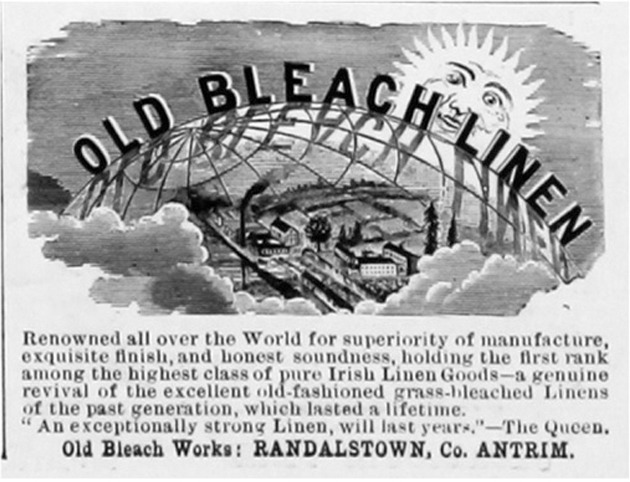 Northern Ireland’s reputation as one of the most significant linen producers in the world is built upon a long history of tradition and skill. The iconic nature of Irish linen is a reputation that has been cultivated and honed over many centuries and encouraged by a number of factors. Linen was produced from the 13th century in Ireland but remained no more than a ‘cottage’ industry until the 17th century when the industrial production of linen began in earnest.

Ironically, the Irish linen industry emerged as a result of the Irish Woollen mills whose success threatened the British Woollen industry. As a means of eradicating the competition, the British woollen industry aggressively promoted the production of flax in the North of Ireland. Happily, the damp bogginess of the Irish climate and landscape provided ideal conditions for the growth of flax, the fibres of which are spun into yarn and then woven into cloth. Irish water also plays a significant role in production as the softness of the water used when washing the yarn and dyeing the cloth further enhances the quality of the linen.

When the linen industry took hold across Northern Ireland the most knowledgeable and skilled specialists where sought from Belgium to advise and oversee the intricacies of the industry. This collaboration of natural forces, traditional means of production and expertise led to the unparalleled quality of Irish linen.

The production of Linen in Northern Ireland regrettably declined following World War II as it had been used copiously to produce uniforms for the RAF and Royal Navy, cutting the supply to civilians.  Irish linen it still recognised for its unique beauty today and is much sought after. We are proud to be positioned geographically within such a rich tradition of textile production.