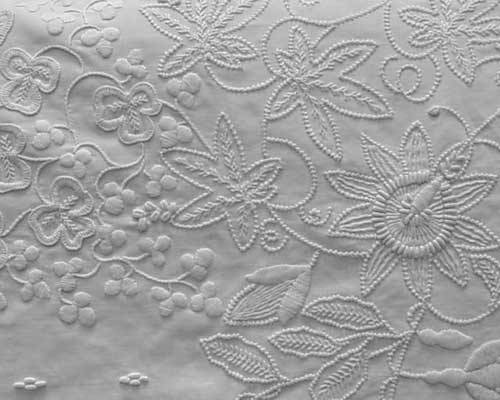 Translated from Irish to mean ‘soft bogland’, the town of Mountmellick lies in a meander of the river Owenass in County Laois. Quaker’s industrialised the town in the early 18th century establishing industries including breweries, a distillery, tanneries, wool and cotton mills. This industrious history provides the context for the emergence of one of the only needle-arts native to Ireland, Mountmellick embroidery.

This distinctive style of embroidery is believed to have been pioneered by Joanna Carter, who in 1816 received an award at a London exhibition for developing new embroidery stitches which provided the basis for the Mountmellick technique. She ran a girls school in the town teaching them to embroider as a means to earn money for their school books, firmly ingraining Mountmellick embroidery into the heritage of the town it’s named after.